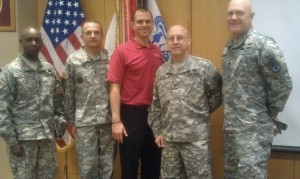 Several months ago, after the release of my new book, Own Your Success, I was contacted by Dr. Ben Moses, a high school classmate currently a battalion surgeon at Fort Sam Houston in San Antonio, Texas. He asked if I could raise money to purchase copies of the book for his troops – 780 wounded warriors – and if I would be willing to come speak to them, to inspire them. I was incredibly honored by the request.

Over the next few months, I prepared to speak to these troops – the real faces of freedom who have made it possible for us to enjoy the freedom that we have in this country. I wrestled with what type of a message to share. What could I say to inspire these individuals that have made the most powerful sacrifice in their service to our country? I was notified that all 780 warriors were in transition back into society because of the wounds they incurred while serving in Iraq and Afghanistan.

I arrived at Brooke Army Medical Facility with my dear friend and another high school classmate, Adam Loewy. We both had adrenalin pumping knowing that we would soon be meeting some of America’s real heroes.

As we sat in the auditorium on the fourth floor of this enormous medical facility, the troops began to shuffle in. Many of them were single and double amputees. Many came in on crutches or couldn’t walk on their own. Many had burns that covered their entire face.

Yet, each and every one of them still walked with head held high, embodying the honor of having served this great country.

Captain Levalley, the organizer for the event, welcomed me to the stage. After much consideration, I focused my message on empowering them to reconnect to the greatness that lies within them, the greatness that motivated them on the day they joined the Army. I encouraged them to recognize that in this time of transition to a new chapter in their lives, they could once again touch that greatness within by recognizing that their service to this country is what allows all of us to have our freedom. I cited many examples of individuals who have overcome adversity and inspired me by connecting to the greatness that lay within them.

After finishing the talk I was absolutely floored by the response and by the troops who came up to thank me. In reality, Adam and I were the ones inspired that incredible day, by these soldiers, by their service and their sacrifice.

I had the opportunity to talk to some of the troops. I was blown away by their perspective and their outlook on life. The first was a gentleman named Chris Byers, a Purple Heart honoree, and a double amputee who stepped on an IED in Afghanistan. Now a father of three children, he told me that he focuses on being able to wrestle with his children and throw his daughter up in the air. He said, without any hesitation, without any doubt, he would welcome the opportunity to go back for another tour.

The next person walked over to the book table with an air of confidence. I signed a book and handed it to him as he talked to Chris Byers and me. He explained that he was Sergeant Major General Jack Tilley, only the 12th Sergeant Major General in the history of the United States. Adam and I recognized that we were among some of the greatest heroes in our nation.

Next, Adam and I had the opportunity to watch two individuals, Major Stockton and Major Smith, receive Purple Hearts. The ceremony was absolutely incredible to watch. The Purple Heart is the longest standing military award, dating all the way back to George Washington. Stockton received his award and said to the crowd that the greatest day of his life was the day that he first put on his uniform, and if he had to do it all over again and go back, he would.

It was this mentality, this commitment to service, to freedom, to the United States of America, that will forever change my life and forever change my perspective on what we can do to serve people at a greater level. This holiday season, appreciate your freedom, appreciate our troops, and get connected to your loved ones.

Happy holidays to each and every one of you.