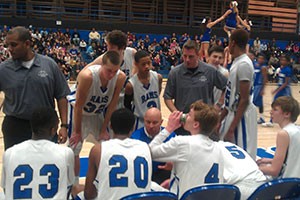 What is your vision for the coming year? Is it clear?

This year has been incredible for me because I’ve had the opportunity to work with the boys’ basketball team at my alma mater, Ladue High School. At the beginning of the year I worked with the team on mental toughness training and gave the pre-game talks.

This team is comprised of a strong group of kids who had a big vision coming off last year’s conference championship season. Early on, they recognized that this year could – and would – be special.

My passion to serve the boys on this team led me to become a pseudo assistant coach, not only spending time at practices and giving pre-game talks, but actually being on the bench with them during the games. To be part of their season has been one of my greatest honors.

In Ladue boys’ basketball history, there is only one team that won back-to-back conference championships, in 1997 and 1998.

I was very fortunate to have played on that 1997 team.

This year, after having won the conference last year, Ladue had a chance to become the second team in school history to win back-to-back conference championships. On Friday night, February 15th, Ladue stepped onto the court one win shy of that championship.

I had been telling the kids all year long to stay focused on their vision, to give maximum effort, to pull their vision down and to work hard and practice. I told them that wins and losses are determined by how well you prepare – in your practice and your belief system. Wins on a basketball court and wins in life don’t just happen by looking up at a vision high in the air, up on the canvas on your imagination.

Your goals are achieved when you grab your future, bring it into focus each day, and give max effort to what you believe.

Are you giving your max effort in your life?

On February 15, 2013, the Ladue boys’ basketball team stepped onto the court against their rival, Clayton. I am so proud to report that their focus on maximum effort all year paid off as they beat down the door of their legacy to become the second team in school history to win back-to-back conference championships. They extended their record to 20 wins and 4 losses and are currently ranked fourth in the city of St. Louis. And they won that final game by 30 points!

One of the messages I shared with the team, and may resonate with you, is the fact that we can all achieve more in life when we trust in the greatness of others.

These boys trusted in each other to accomplish their vision and their dreams.

Are there people you can trust more in order to accomplish greater things?

The boys on the Ladue basketball team are writing the story of their life, of their season, of this special team.

You are also writing the story of your life, of your journey.

When we come together as a team and write our story as one author, as opposed to trying to do things all by ourselves, the story reads more beautifully. We also have a greater impact on each other, just as these boys impacted each other by working together. They may not recognize it now, but it was the lessons I learned from being on a team in high school that have helped me understand that you can accomplish so much more when you trust in the greatness of others.

It has been such an honor to serve as a coach on this team…helping them with their mental training, helping them embrace maximum effort.

What is your definition of maximum effort?
How badly do you want to live your vision?
And how hard are you willing to fight for it?