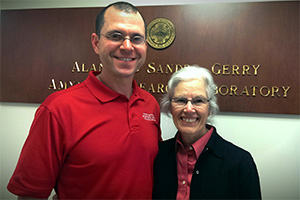 We, as Americans, have all come together once again to support one of our cities that has been assaulted by terrorism. Once again, Americans have risen up and with power, perseverance and resiliency the city of Boston has shown the world that we can choose how we respond to hatred and violence. When we respond by staying beaten down, which Americans typically don’t do, that’s when terrorism wins. When we get up off of that mat of adversity no matter what the obstacles or circumstances, we win and terrorism fails. Boston is another shining example of how Americans unite to fight against terrorism and hatred.

On April 22nd, I had the opportunity to fly to Boston to speak. At 2:50 that afternoon, one hour after my plane landed, the city of Boston had its moment of silence to recognize the bombing victims. After that moment of silence, I took a trip to Boston Medical Center, which is where my mother received her treatment 27 years ago for amyloidosis. I remember how my mother chose to re-frame her adversity, just like the city of Boston has chosen to reframe recent events into a sign of strength and unity.

Each time my mom got the call from Boston Medical Center to schedule her treatment she would turn it into a family vacation for my brother and me. While in Boston, we’d go to Chinatown and go candlestick bowling. And afterward, we would remember the smile on our mother’s face.

At Boston Medical Center, I visited with my mother’s doctor, Dr. Martha Skinner, who treated my mother over 27 years ago. Dr. Martha Skinner is one of those individuals who has not stopped her fight. She is an amazing example of the power, courage, and resiliency of Boston. Amyloidosis is a disease with no cure. At the time of my mother’s diagnosis, there was no treatment either. Because of Dr. Skinner’s determination, ten years after my mother lost her battle with this disease, she was one of two doctors in the world to discover that high dose chemotherapy enables people to live with amyloidosis.    Her fight, her perseverance despite lack of funding or support never deterred her, just like the people of Boston will not be deterred. Just like the United States of America will not be deterred, no matter who tries to bring us down. We always unite to make a bigger difference and continue to fight for something better.

Let’s be BOSTON STRONG! Let’s continue to recognize our heroes – the ones who fight battles for us every day. My mother and Dr. Skinner are two heroes in my life.

Who are your heroes? Let us know in the comments below.